Eden Tesfay owned a store on the corner of Summit and Sixth street in Weinland Park for years. That store is now rubble.

Cornering Stores is the story of Eden’s cornerstore and others like it that have been sued by the city for being “hubs of criminal activity,” an idea that goes to the heart of many changing neighborhoods.

The carryout and its owner were sued in 2017 as a public nuisance for alleged criminal activity, seemingly based on the idea that corner stores are hotspots for crime — an idea perpetuated during the gentrification of Over-the-Rhine in Cincinnati.

When it comes to development in the midwestern city that’s now larger than San Francisco, local media in Columbus, Ohio typically reports on the who, what, when and where, but often lacks the how or why. Our team of investigative reporters are dedicated to challenging that traditional local news narrative by interviewing unheard and diverse voices — such as Eden Tesfay, an Eritrean immigrant who settled in Columbus and former owner of the Natalia’s Carry Out property — to elevate more nuanced perspectives that provide creative context to an otherwise one-sided story. 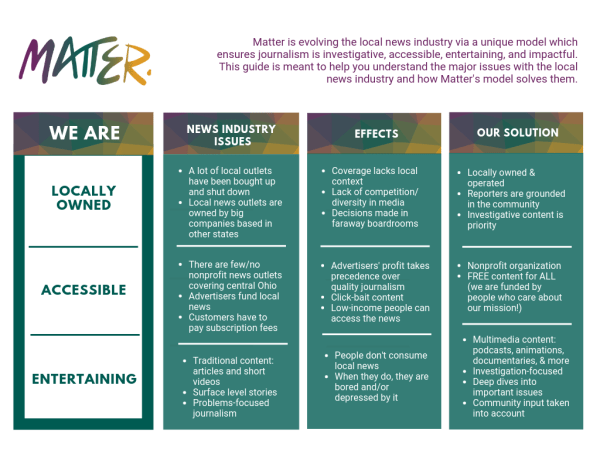 Invest in local stories like Eden’s.
As a nonprofit, we rely on donations from invested residents to keep producing quality, investigative journalism. We always want to keep our coverage free and open to the public, so no one is barred from accessing critical information about their lives based on income. This is especially true when the neighborhoods we’re reporting on (much like Weinland Park) might not have the financial resources to get past a pay wall.

But that means we need help from those who can invest in ensuring we know exactly what is going on in this city we all call home. Your generous, tax-deductible donation of any amount is highly appreciated.

What was Natalia’s Carry Out?

Natalia’s Carry Out was, as you may have guessed, a carryout in the Columbus, Ohio, neighborhood of Weinland Park. The business was located across the street from a community park, an elementary school, and an early childhood center. The store was shut down in 2017, when the City of Columbus declared it a nuisance.

That year, the City of Columbus filed a complaint against Natalia’s Carry Out for having “a general reputation in the community and among the Columbus Police as a public nuisance.” It, according to the complaint, was known to be a location where “gang members, felons, and persons with active warrants hang out.” From 2015 to 2017, “police responded to Natalia’s Carry Out on reports of shootings, assaults, disturbances, weapons offenses, and drug activity.” Additionally, the store’s manager sold alcohol to an undercover underage informant for Columbus Police on six separate occasions, and police sent the property owner multiple notifications and warnings about the operations at Natalia’s.

In the end, the Franklin County Municipal Environmental Court order the store to shut down, and the building was demolished in 2018.

Why do you want to tell this story?

Natalia’s Carry Out seems, at first glance, to be a straightforward case; clearly the business broke laws and didn’t take adequate steps to address its problems. But here, context matters. Weinland Park borders The Ohio State University, and it’s a neighborhood that the City and Campus Partners, a collaboration between the university and developers, have focused on transforming.

In the past, other cities such as Cincinnati have pursued neighborhood development — or dare we say gentrification? — in part by buying up or closing down locally-owned carry outs. Columbus, Ohio is going through it’s own period of expansion, with less expensive areas becoming hotspots for growth. This economic, demographic and cultural change is why we’re also investigating the cornerstore’s intersection with crime. Many of the same charges leveled against Natalia’s Carry Out — weed, underage alcohol sales — could be leveled against higher-end bars in the Short North, but often aren’t. We want to explore how Natalia’s Carry Out fits into these broader efforts to “rebuild” Weinland Park.

Through this podcast, we want to explore whether law enforcement is fairly applied to all areas of Columbus, how wealthier stakeholders are trying to shape the area, and whether the vision and strategy of Weinland Park development will actually produce an equitable, just, and socio-economically diverse neighborhood.

Where is Weinland Park?

Weinland Park is located in Columbus between Ohio State’s campus and downtown. It’s found between North High Street and Milo Grogan, between 11th and 5th avenues.

What is Matter News?

Matter is a digital news source for all of us who receive too much information and not enough context. We are investigative, community-informed, multimedia, nonprofit and local.

We investigate the most pressing issues in Columbus in the format that can best tell the story, including videos, articles, podcasts, games and more. Our multimedia content is tailored story by story to ensure comprehension, engagement, accessibility and empowerment for the Columbus community and beyond. We investigate one issue at a time, using a “deep dive” model (once we grow, we will cover a few issues at a time). This targeted approach allows our reporters and editor to dig deeper, to explain more of the nuance and context and to cultivate a more profound understanding of what they’re covering. We are also one of the only locally-owned, nonprofit news outlets in Columbus, meaning we are not funded by advertisers with a profit motive. Most importantly, our content is free and we aim to be as accessible as possible.

Who will be working on this podcast?

Our Natalia’s Carry Out podcast is headed by the intrepid Ris Twigg, Matter News’ managing editor. She’s an Ohio State graduate with a background in environmental and urban development. The team also includes reporters and producers Taijuan Moorman and Olivia Miltner, who both have experience reporting and writing about Columbus. Our editor-in-chief, Jaelynn Grisso, is a jack-of-all-trades and provides wisdom, web development and fundraising support.

How will this podcast be structured?

Where can I find episodes?

Once the podcast is completed, weekly shows will be broadcast on a local NPR affiliate, WCBE, and episodes will be available on popular streaming platforms such as Google Podcasts, Apple Podcasts, Stitcher and Spotify.

How will my donation be used?

Your donation is essential for supporting every aspect of our podcast. We’ve already laid the groundwork by researching and contacting sources to make sure our idea is viable and can become a reality. Now we need funding to pay for equipment and studio time, along with — most importantly — paying our wonderful and dedicated team.

How else can I support Natalia’s Carryout and/or Matter News?

Right now, our most pressing need is money. We have the time, we have the talent, but we need the treasure. If you’re interested in further financially supporting Matter News and the investigative local journalism we produce, please become a member by signing up to give monthly donations. You set the rate — we appreciate every little bit.

We also host a variety of get-togethers around Columbus and often have a booth at community events, so keep an eye out for the next time we’re near you; we’d love for you to stop by!

We also send a monthly newsletter with our content and updates, which you can sign up for here.

I want to share a news tip, idea or story pitch.

Have an idea for a story? A pressing issue you wish local media would talk about? Simply a question about local development you’d like unpacked? We’re here you, just send us a message at hello@matternews.org.

We are currently unable to pay for contributions, although we’re hoping to change that through fundraising for projects like this podcast. If you’re a reporter or writer interested in working with us, we’d be happy to meet with you to discuss volunteer opportunities. Otherwise, we’d love to reconnect when we can pay you for your wonderful work.