{"card-share":{"shareable":false}}
Students, speakers and press gathered outside Columbus City Schools Board of Education President Jennifer Adair's house to protest the presence of Columbus police in schools on June 8, 2020. |Twinkle Panda
Crossing the Line

In the weeks after Columbus schools "abolished" the agreement to have resource officers, students reflect on what role officers had in their education. 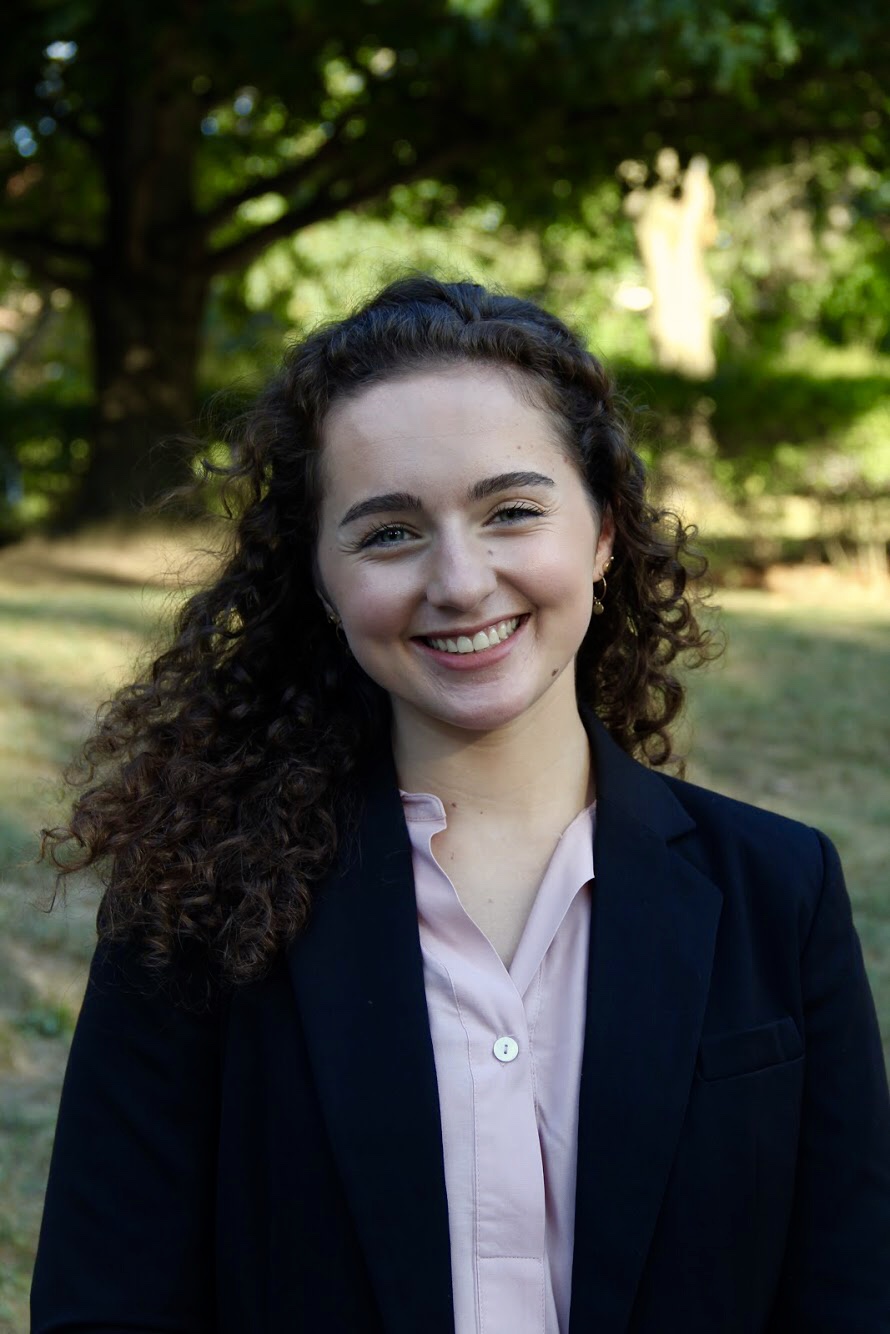 Lauryn Rogers loves poetry. A student at Columbus South High School, she said she found it to be an escape during her freshman year of high school when she struggled to stay focused and grounded in her life and at school.

“I wasn’t mentally there, wasn’t physically there,” Rogers said. “I would go to school physically, but you know how your body can be somewhere and your mind isn’t?”

“ … But I just went because if I didn’t I would get truancy,” she said.

Rogers is one of several students, teachers and administrators that expressed concern about the lack of behavioral and academic outlets in the Columbus City School district. While the district is making an effort to improve their mental health resources, school resource officers are expected to de-escalate a situation that is already out of hand, reaching the student almost too late to address the behavioral issue presented.

Cities and police departments across the country are grappling with the effects of systemic racism and police brutality following the death of George Floyd in Minneapolis, Minnesota. Protestors flooded the streets, demanding their city governments to defund and abolish the police. In Columbus, the conversation is the same. Institutions within the city are now forced to consider how they have contributed to the marginalization of Black and brown people in their community and that includes Columbus City Schools.

“In our school we’re the majority, but in the world, we’re the minority and most teachers don’t get their training on how to handle us, how to educate us. The majority of their job is centered around the white majority.”
Lauryn Rogers, Columbus South High School student

The district’s contract with the Columbus Division of Police – which provided Columbus schools with 19 resource officers and two sergeants – expired on June 30. Less than a week later, Chief Tom Quinlan issued “abolishment notices” to twenty-two officers stationed at high schools within the district. The non-renewal comes after a wave of protests from organizers advocating against SROs in schools.

“We let the contract expire because it provided the opportunity to have the much needed conversations around a more holistic approach to student safety within our building, which include both physical and emotional things,” CCS Board of Education President Jennifer Adair said.

On June 5, a group of organizers advocating against school resource officers published a public letter addressed to the district’s leadership team, criticizing their handling of racial inequities and policing in CCS, establishing a list of demands and asking community members and organizations to sign. As of August 13, the letter has over 3,300 signatures. On June 8, over 100 activists and demonstrators protested outside of Adair’s house.

Julia Allwein, an undergraduate student at Ohio State University who graduated from Columbus Alternative High School in 2018, was one the organizers who helped write the letter. She also stood outside Adair’s home.

“There’s really no reason to have them [SROs] in school if we believe in investing in our students and not criminalizing them,” Allwein said.

The School-to-Prison Pipeline, an idea that increased policing of Black and brown youth as early as preschool creates a gateway to imprisonment in adulthood, is one of the major concerns of activists, students and teachers alike within CCS. According to studies on race, Black girls are seen as more mature and “less innocent” as young as five years old compared to their white counterparts. Black boys are seen as older by the age of 10.

According to Allwein, CAHS is an “anomaly” in terms of treatment by the district. An SRO was present on campus when Allwein was enrolled, but she said CAHS is not policed in the same way that other CCS high schools are.

Weekly arrest logs dating from the 2017 school year to the present show that arrests at CAHS were significantly less than arrests at high schools in the district like Marion-Franklin and South.

In Ohio, black female students are three times more likely to be arrested than their white counterparts.
According to an American Civil Liberties Union report

At South, the discipline is much different than at CAHS. Rogers – a South student who advocates against SROs in schools – remembered a fight that broke out in the cafeteria while students were transitioning to their next class period. When the SRO arrived at the scene, Rogers said he grabbed one of the female students by her hair and pushed her up against the wall.

“They threw her on the floor while she was in handcuffs, and I just felt that was unnecessary,” Rogers said.

A report from the American Civil Liberties Union in 2019 revealed that Black female students are 3 times more likely to be arrested than white female students in the state in Ohio. Marion-Franklin has one of the smallest high school populations in CCS, but the highest arrest rates.

“I know I’m not a troubled kid,” she said. “But it’s also a sense of – I need to stay alert at all times because they might mistake me as somebody else because I have the same hairstyle or we have the same clothes.”

CCS lacks in many realms of support for students

Rogers explained that when she first arrived at South, everything was new. Eventually, she said she got used to seeing her classmates not care and seeing her friends drop out, which was normal at her high school.

“A lot of teachers will tell you they don’t even care. They’ll tell you ‘It’s your education, they already got theirs,’” she said.

According to Rogers, the counselors that were available only addressed urgent mental health crises, such as an event when a student is suicidal or self-harming. She said she was lucky to find teachers that cared about her success and well-being when she was a freshman.

@cpdoutofccs coalition protest out of Ragland's house. Even though school police officers have been removed, the Coalition wants to keep putting consistent public pressure on the school board to make sure cops are not reinstated in schools. In the video, some students & alumni spoke about why students want cops out of schools and what police brutality looks like for students. Coalition members said that Ragland & the school board have not prioritized student safety.

One of those teachers was Brian Johnson, a world history teacher.

“I don’t care if you’re at the bottom, if you're an F-student, you're a D-student, if people say you can't work,” Johnson said. “I don't care who you are.”

“I’m going to challenge you the same way I challenge the Honors students or the AP students.”

Johnson, who now teaches at Whetstone High School, attended the district and graduated from CAHS in 1997. Instead of supplying schools with SROs, the district utilized the Positive Efforts for Adjustment and Knowledge program, which is comparable to the district's current in-school suspension policy.

“If you didn’t do the work, they pretty much ignored you,” he said.

Johnson is also critical of the leadership within the district, and can remember times when coaches – who also serve as safety and security guards – approached him and asked if athletes could make up six weeks worth of work for his class.

As a teacher, he can see both sides of the apathy some teachers may feel towards a student’s success if their classroom is not committed to improving themselves academically, and if they’re not given the resources by the administration. At times, Johnson remembers not being able to find any principles and security officers in the building when a student was disrupting his teaching.

Only an SRO could be found.

“I think that they miss a perfect opportunity to actually ingratiate themselves like actually immerse themselves into forming relationships,” Johnson said.

“They're there as an extension of the criminal justice system. They're also there when the security guards are not anywhere to be found.”

Johnson said he believes the students who have behavioral issues in the classrooms are the same ones that never recieved an academic foundation in elementary and middle school, causing them to deflect and act out. At South, he was often asked by administrators why students in his classroom weren’t passing.

“Rather than ask why kids are failing, ask, ‘Why am I getting thirty percent of my kids reading at an elementary school level,’” Johnson said.

Curriculum audit reveals a lack of direction for students and teacher, while some high schools receive less funding than safety and security

The Columbus Board of Education requested an audit for the district this school year, following an incident in 2014 when it was revealed that the district was scrubbing data about students, falsifying passing grades and attendance records.

“Let it be known, right. We are not perfect, we have a history, and nobody wants to repeat it,” Adair said.

According to the audit, the district lacks an institutionalized system to eliminate “... campus-level inequalities and inequities that create barriers to equal access to the district’s programs and services and achievement …” for all students, among other findings. It continues by addressing the lack of clear direction CCS has for student achievement.

“We're not, you know, we're not hiding anything,” Adair said. “We know that we have a lot to work on, to really make sure that we're providing the best education, the most equitable education for all of our students.”

The district has allocated over $2.4 million in the budget from its contract with CPD, which renews bi-annually. According to Adair, the district plans to reallocate the SRO funds to the safety and security department.

CCS has allotted $1.65 billion for the next budget, with $8.3 million of that for the safety and security department, according to the budget. Out of the overall budget, CAHS will receive $8.1 million, while Marion-Franklin, the high school that saw the most arrests since 2017, will receive $5.9 million. The minority population at Marion-Franklin is 66%, where Black students make up over half of the student body and white students only make up about a third.

”It really says something when you learn in a building alongside rats and roaches, but the district is still willing to invest $1.3 million in an armed officer to watch you while you walk down the hallway,” Allwein said.

In 2019, the district added 31 members to its safety and security team, increasing staff numbers to 84.

In accordance with the recommendations from the curriculum audit, Adair said the district has already started working on improvements that make a fair education more accessible for its students.

“It's important that we keep an eye on equity as it impacts every single thing the district does so it's not just curriculum, it's also in hiring, it's also finance, it's also in technology,” she said. “It's all of it.”

Johnson wants to continue addressing racism and the lack of care by leadership within the district. Most of all, he wants his students to challenge themselves in every way possible.

As Rogers, a Black female student, enters her final year in the CCS district, she hopes that teachers will learn how to support Black and brown students.

“In our school we’re the majority, but in the world, we’re the minority and most teachers don’t get their training on how to handle us, how to educate us,” she said. “The majority of their job is centered around the white majority.”

She plans on attending Howard University after graduation.

“I think we need people who genuinely care about us.”