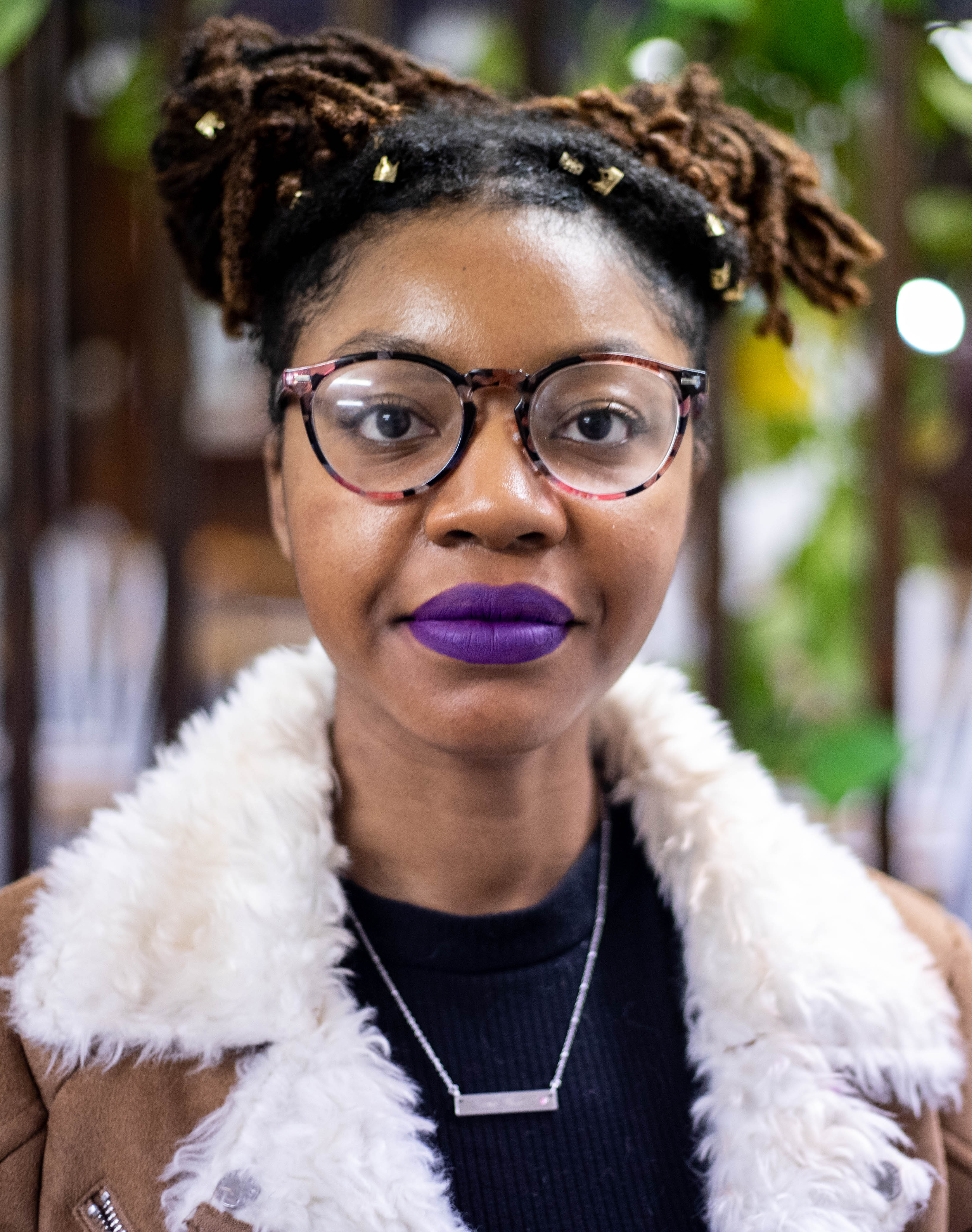 This story was originally published on March 9, 2019.

My junior year of high school, about 8 years ago, I stayed with my grandma in the Dublin-Granville Road area. It was more convenient to go from her house to school or work rather than staying at my house with my mother and sister. The time and lessons that I learned from grandmother are things I’ll hold close to me forever.

She’s not your average grandma, or Mama as I call her. My grandma is fierce, energetic and has an amazing fashion sense. But like your average Black grandmother, she loves going to church. Honestly, I believe it was like her safe place. Surrounded by a group of people that she’s made, our family. Every Sunday morning, my grandma barged into my room. The sun shone on my face through her white curtains. I’d hear: “Hey Nas, you gotta get up for Church.” Annoyed and tired, I’d get up and drag myself to the bathroom to get in the shower and constantly hear my grandma tell me how my clothes were “inappropriate.” Fun.

We’d step into her 12-year-old navy blue BMW and drive from Sawmill Road all the way down to Smyrna Missionary Baptist Church on Wilson Avenue, Black gospel music playing on the radio. We sang the words to the songs, as I looked out the window to see the world around me. The ride seemed so long because my grandma always avoids the freeways at any cost. Every car ride, she’d turn the radio down a bit and say the same thing. “Do you know where I would be if I knew what I know now? I wish I had the opportunities and resources your sister and you have.” Each time, I’d brush it off, tired and uninterested in having that type of conversation. The question was rhetorical but it now speaks volumes to me. After all, it’s a question that many old Black-Americans ask.

Truly, I don’t come from wealth. My maternal grandparents grew up together in the Near East Side of Columbus in the 1950s and 60s in a housing project, formerly known as the Bolivar Arms housing project. They lived there for much of their childhood, but both left in adulthood. My grandfather returned to the Near East Side in the early 2000s, but the neighborhood and the Columbus that they spoke of experiencing as young adults is not what we see today.

Columbus’ major shift toward gentrification is well illustrated in “Flag Wars,” a 2003 documentary directed by Linda Goode Bryant and Laura Poitras, who directed the documentary Citizenfour about Edward Snowden. They focus on early gentrification and housing discrimination in the Near Eastside, and in particular, the Black working class in Olde Towne East. The residents repeatedly share the sentiment that they are targets due to their lack of access to resources and financial knowledge, as well as their subsequent inability to comply with code violations. The discrimination they faced on the part of the new residents forced many Black families to create their own safe spaces. Subsequently, they were being forced out of their long time neighborhoods. Where are people supposed to go? We want to improve these neighborhoods, but not if that means people being forced out.

THE SYSTEM WAS CREATED FOR US TO FAIL

One of the main characters “Flag Wars” follows is Chief Shango Baba Olugbala, a Yoruba priest. We, the audience, see his viewpoint regarding the changes in his neighborhood due to gentrification. He fights to keep the sign that he created in front of his home that doubles as an art gallery. The sign is flashy at best but fits with the aesthetic of the Near East side, a historically African-American neighborhood, to match his African-American museum. Unfortunately, the afrocentric sign was hated by the new residents taking over his neighborhood. In the beginning of the documentary, Olugbala believes that the creation of historical sites in Old Towne East is a tactic to increase the price and interest of gentrifiers.

I mean, can you blame him? According to Jason Reece, an assistant professor that studies race and ethnicity, “Racism has been embedded in housing policy and, I would argue, [it] is the foundation of our housing policy … The inequities in our community today were by design.”

The system was created for us to fail. These neighborhoods are preyed upon and there seems to be traps placed on the ways for people trying to sustain their homes. Those traps are exposed in “Flag Wars.” In court, Olugbala states to Judge Pfeiffer’s: “I see no way I can get in compliance because each time I go down there will be a group of people who are not of my mind will cause those people who are like them to vote against. So I see no way I can get in compliance. And then it doesn’t specify clearly the problem with the sign the sign is my name and address.”

The new residents used code violations were just a legal way to state their hatred for the sign. There are many steps to gentrification, it’s not an overnight process. In fact, Ris Twigg demonstrates those steps in “Revitalization or displacement: What is gentrification really?”

Here Twigg states, “The five-stage model explains what happens when a neighborhood gentrifies, but what it misses is why gentrification unfolds.” A key concept. Later she references Peter Moskowitz, the author of “How to Kill A City” saying, “the fifth and last phase of gentrification is when neighborhoods aren’t just more friendly to capital than to people, but cease being places to live a normal life — with work and home and school and community spaces — and become luxury commodities.” A process seen partially in the neighborhood my grandparents grew up in Sawyer Manor, formerly known as Bolivar Arms. The area was formerly entirely public housing, but now an Atlanta-based company owns the towers called Latitude Five25.

ECONOMIC SEGREGATION AND DISPARITIES ONLY ADD TO THE PROBLEM

Many Black families don’t have the means to start over in a new home.

According to the Ohio Development Services Agency, today the median income of African-Americans in Ohio is nearly cut in half at $32,000 compared to overall Ohioans at $54,000. “Affordable” housing is an important equalizer, but it’s definition doesn’t seem to consider the realities of residents’ income. Nearly one-third of the people in our community are below the poverty line.

Economic segregation is a covert way to create separation without it “being about race.” This leads to an overwhelming amount of Black people who are homeless in Central Ohio. Recent studies have found that Columbus has high rates of economic segregation compared to other major cities in the U.S., according to an Columbus Dispatch article in 2016. .

Nearly twice as many Black people as white people are in the homeless system. Gentrification is putting a band-aid over an issue that needs stitches.

Which leads me to the story of Linda Mitchell, another resident followed in “Flag Wars.” Mitchell was fighting to keep the home that her parents passed down to her despite the code violations thrown at her while she was dealing with cirrhosis of the liver. A question that came to mind when I heard her story: Why didn’t anyone consider the situation that she’s in? And how heavy it is to deal with health issues, holding on to the home you grew up in, and going to work to survive and pay the court fees to keep the home you have? It’s a disastrous cycle.

Judge Richard Pfeiffer, who was a state senator before becoming a Franklin County judge, goes to her home and he tells her that she can’t afford to fix her home to comply with the violations and asks her “Why shouldn’t I take your home? How can you fix this? You don’t make enough money.” He demonized her. Think about how tough it would be to deal with being treated for cirrhosis of the liver and the reality of possibly being kicked out of your neighborhood. Most of all, this is the home passed down to her by her deceased parents.

Historically in this country, Black people are not allowed to keep what belongs to them. Towards the end of “Flag Wars” the woman repeats that “these people,” referring to Judge Pfeiffer and white gentrifiers, are trying to take what is theirs. A battle that we face daily. We shouldn’t have to jump through hoops to keep what we’ve worked to obtain. The idea of passing down materialistic things like watches, chains or clothes to your children isn’t realistic to many Black families so, money usually is the last thing many Black people expect when someone passes on. “Flag Wars” identifies that the new homebuyers come from generational wealth and are given sums of money through an inheritance or family member in order to buy a home. And although the film was created in 2003, the hardship African-Americans face still rings true today.

Ogulaba said the distinction between people like him that are not gentrifying the neighborhood and the new white, gay gentrifier coming into the neighborhood is that he didn’t have an inheritance that paid for their first home. They worked to obtain to these homes. I related to that sentiment the most throughout the film. Sadly, my grandpa passed almost four years ago. He left a few of the most precious family heirlooms to my sister and me: his knowledge and life experiences. I remember hanging out with my grandfather on the summer days of my childhood. We’d drive in his old, red pickup truck down Mt. Vernon Avenue while listening to Frankie Beverly, my grandfather’s twin. My grandpa was so smooth and charismatic. He was loved, and everyone knew my grandpa in every place he went on Mt. Vernon Ave. At the time, I didn’t understand why my grandfather loved going to this run-down neighborhood. Today, I see what he saw. A place that he felt understood. His neighbors knew who he was and he knew each of them as well. It was more than his home. It was his community.